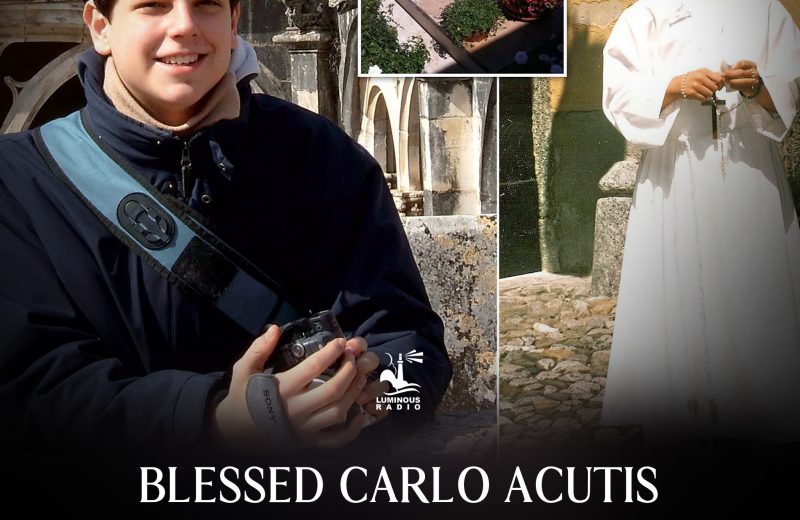 Carlo Acutis, known as the cyber-apostle of the Eucharist, is beatified on 10 October 2020!

The life of Carlo Acutis

Carlo Acutis was born on 3 May 1991 in London (England), where his family lived for work. Years later they moved to Milan (Italy).

He received his First Holy Communion at the age of seven, and since then his life has been marked by a deep love for the Eucharist, which he considered to be a “road to heaven”.

He attended Mass every day and also prayed the Rosary, driven by his devotion to the Virgin Mary, whom he considered his confidant. He also gave catechism classes to children and helped those most in need.

Carlo’s intense spiritual life led him to invent what some have called a “kit to become a saint“, formed by Mass, Communion, Rosary, daily Bible reading, confession and service to others.

Acutis also developed a special talent for computing and was considered a genius by the adults who knew him. He has created virtual exhibitions on topics of faith, such as Eucharistic miracles throughout the world. He did this when he was 14 years old.

When he was diagnosed with leukemia, Carlos decided to offer his sufferings to the Pope and the Catholic Church. He died on 12 October 2006, the feast of Our Lady of the Pillar, at the age of 15.

The Medical Council of the Congregation for Saints’ Causes has expressed a positive opinion on an alleged miracle attributed to the intercession of young Carlo Acutis, who died of leukemia at age 15 in 2006. He was declared venerable in 2018.

The miracle regards the healing of a gravely ill boy in Brazil.

For his canonization, it is necessary that the Church officially recognize another miracle accomplished through the intercession of the young Italian.
Share: